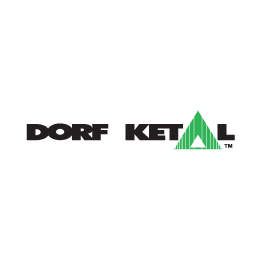 Classic esterification reactions between a carboxylic acid and alcohol (Fischer Esterification) typically require the use of a strong acid catalyst in order to increase yield, reduce reaction times, and lower reaction temperature to make them viable for commercial use.  Often times strong acids like sulfuric acid or sulfonic acid is used as a catalyst to improve the reaction rates and conditions of esterification reactions. Organometallic chemistry can also be used in place of an acid in the production of esters, however, these catalyst often contain tin, antimony, or other metals.  These traditional catalysts, while effective, can be dangerous and have long lasting environmental impacts.

Tyzor® Organic Titanates and Zirconates are chemical compounds consisting of organic functional groups that are linked to a central titanium or zirconium atom via an ester bond.  Tyzor® esters are useful as non-toxic, organometallic catalysts for esterification and transesterification reactions.  In esterification reactions, Tyzor® acts as a metal-based Lewis acid and increases the reactivity of the substrate resulting in faster reaction rates and a higher yield.  This makes Tyzor® and excellent choice for ester manufacturers that are looking to improve efficiency of reactions while reducing the hazards and environmental impact associated with strong acids and organometallic catalysts containing tin or antimony.  To highlight the usefulness of Tyzor® Organic Titanates a Lewis acid catalyst, Tyzor® TPT  and Tyzor® TE were compared to sulfuric acid in the direct esterification of adipic acid to bis-2-ethylhexyl adipate.  The reaction efficiency is shown as percent conversion over time in the table and graph below. 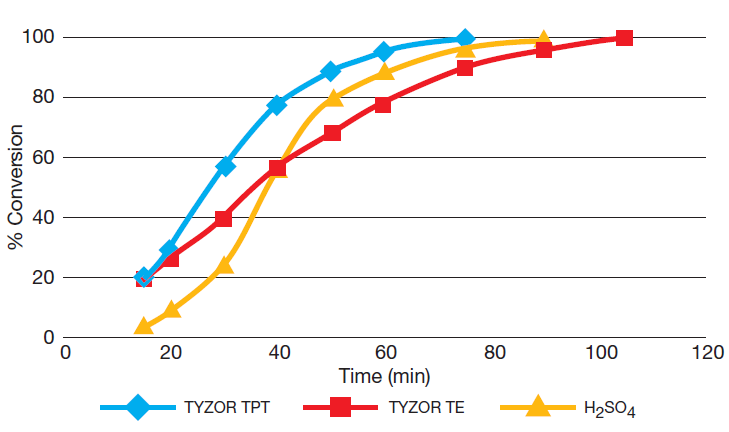 Tyzor® TPT is a highly reactive chemical compound and the data above shows that it provides a faster reaction time, and more efficient catalysis than sulfuric acid.  Although Tyzor® TPT is the most active chemistry in the Tyzor® product line and will react very quickly, it may not always be the most economical for catalysis. It is highly sensitive to water, alcohols, and acids and in certain cases where these chemicals are present, a titanium chelate like Tyzor® TE is more stable and is a more practical metal-based Lewis acid catalyst.

How to Use Tyzor® Catalysts

Tyzor® Lewis acid catalysts are soluble in non aqueous media and can be added to the reaction mixture at any point in the process.  In alcohol - carboxylic acid esterification, like the reaction mentioned above, it is recommended to add Tyzor® catalysts at a temperature above 150°C and sustain a reaction temperature between 180°C and 220°C to achieve the most efficient conversion.  It is also particularly important that water produced from the reaction be removed as rapidly as possible to avoid deactivating the moisture sensitive Tyzor® Lewis acid catalyst.  In most cases a polymerization inhibitor and nitrogen blanket are useful if the corresponding ester being prepared is moisture sensitive.  Catalyst concentration can vary based on the reaction but typically 0.1-0.5 wt% of Tyzor® based on the weight of total product expected from the reaction is sufficient.

In some cases it may be necessary to remove the Tyzor® catalyst from the end product.  While Tyzor® is generally soluble in product esters, it can easily be removed by conversion to it's insoluble hydrolysis product.  Agitation with a small amount of aqueous media and then steam stripping is usually sufficient for hydrolysis of Tyzor® catalysts.  The resulting titanium oxides are insoluble solids and can be removed by filtration.

Tyzor® Organic Titanates are safe and efficient Lewis acids that are used for catalysis in the production of high purity esters and are a safer, more efficient alternative catalyst to sulfuric acid, sulfonic acid, other metal-based Lewis acids for the following reasons:
Selection of the proper Tyzor® catalyst for your esterification reaction is critical for maximizing efficient production of esters and other chemical compounds. Contact us today to discuss your reaction with one of our product experts and find the grade of Tyzor® that is best suited for your application.